In this article, we are going to learn about Dot Net CLR environment and its parameters. We will know details about those parameters and impacts of the parameters in performance bottlenecks.

CLR stands for Common language Runtime. As concept, it is same as JRE. It gives MSIL code to have an environment where it can run.

Let’s break down this functionality with basic understanding of CLR. I will not go much deeper, just those basics what a performance engineers should know.

This basically checks and verifies the code/classes that it going to run. So, CLR must know CLI(Common Language Infrastructure) specifications to do that. CLR has that inside. It also includes Type Checker.

Inside runtime, there is an element called CAS which actually verifies security inside code, access security, execution and authentication related checks over MSIL code. It is ignored in desktop apps but widely used for web apps.

That converts the the MSIL code into machine code to run over OS/kernel. Basically , this runs the application. This is called JIT. Just in time compiler. This takes the MSIL and executes. Inside of Jit, there are

And , the base class library supports that comes with dotnet packages.

Note : Here are some difference between debug mode JIT and Release mode JIT. Generally, in release mode, JIT does more scoping ignoring mini scope and prioritizing global scope, so allocation of memory and CPU will follow that and application environment runtime behavior might depend on that

This is most probably the well known item. Before CLR, GC was present for other language. Microsoft enhance this GC and include other items to make CLR. The main function of GC is to collect garbage from memory(RAM/Virtual storage inside run time environment).

As we know, memory in windows system found in 8 types(except free), GC is all about managing Stack & Heap memory.

By mean of Heap, is managed heap. Un managed heap(regular heap) actually for c++ objects that we wont talk about.

So, to under stand GC, we need to know how dot net allocate its memory. Initially , local functions will be using Stack and when we create object of classes, it will be created in managed heap(new keyword). Here it comes the GC actions.

Dot net categorized allocatable object into basic 3 generation based on Most object die young. That means, the new object is created the quick it will be collected.

So, how GC decide what to keep and what to delete. This is another function of GC called Identification.

This is a basic function for a GC to decide what object to keep , what to delete and what to upgrade to higher generation (from 0 to 1 to 2).

Tracing provide a graph map to show distance from GC root to current object. So, if an object is far from GC, it will last longer generation.

This refers to Collection event when GC collects unused memory and free up the place for new objects.

For performance engineers, there are lot to be taken care of.

So, these are very basic items inside CLR from a overview. 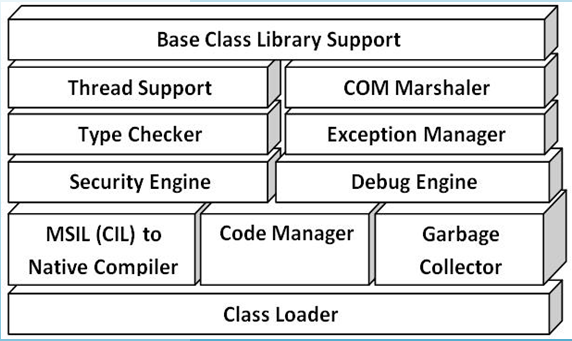 In each of them , we can find separate components. In separate post on performance counters on each of the item, I will explain more about item insides.