In this article we are going to learn about State Design Pattern.

What is State Pattern?

In OO design, when we need to change behavior of an object depending on its state, we use State pattern.

State pattern allows an object to change its behavior depend on the internal state change.

So, now, what is state. A state of an object refers to a.values of its properties b.effects of functions(may be void or any valuated output). So, if the state change, it will work differently.

Let’s consider a sales order , a sales order can be new order, registered in system, granted order, shipped order, invoicing or even cancelled. These are the state of the same order state and its inner states will be change along with the functionality of the whole sales order object. 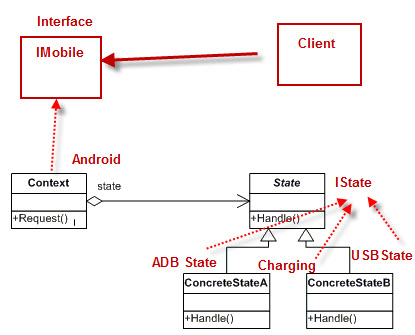 As we know, we will have context , states and client who actually calls the context. So, lets think about how to implement. It is for sure, a context will contain all of its state.

And, a context will have the functions which will be changed as soon as its state has been changed. So, we can understand this context is actually a composition of all state.

And, an individual state should have function defining for each variety of state. That means either a method taking parameter to vary from state to state or, methods for each state behavior.

These are the simple ideas, let see more detail with example.

Let’s consider an android mobile connecting to PC. We will represent an Android mobile as Context object(we may apply interface also that will be called from client).

And, every time the android mobile is connected , depending on state its behavior will be changed. So, that means , each state will represent different behavior.

That means, we have to define at least one method to represent the function of a particular behavior.

We may use more than one method or even describe in a single method, but I guess it is better to use separate methods to represent separate state behaviors(easy to understand).

And, as I told in the beginning, Android will be our context. We may use a context Interface IMobile which should be implemented by the context object Android so that client can initiate Android using IMobile.

This context will have facility to change its own state and providing method to access its state.

And, lastly a Client. A client calls the context and may change behavior to get the context see functions are changing. So,

So, Start with IState interface that contains all state related changing method.

Note: We could make a common method and use parameter to define functionality. But, I use separate methods to understand properly as well as I have use those methods in side separate states to change the states.

Now, Lets make a context interface IMobile that will contain all state changing behavior as well as behavior calling functions.

So, now we call context from client and we will see when the context changed, the same method of a same context provides different results.

And sometimes it is handy to use with other patterns.