In this article we are going to learn about Adapter Design Pattern.

What is Adapter Design Pattern?

By the name we can have some idea about this very easy pattern Adapter.

Adapter design pattern allows us to use a class which is not compatible with exist system by providing adaptability.

More easily, adapter pattern let clients to use any incompatible( not accepted) class/interface.

It allows to access to incompatible interface work together.

Think like as , we have a micro SD card used in mobile and we have a camera who uses SD card. So, we use an microSD to SD card adapter to use out mobile memory card in to camera. We insert microSD card in adapter and directly adapter used by our client camera(who actually expects SD card).

Let say, we have a washing system where a client can clean cloths using SOAP. And we have criteria for a what soap is accepted by washing machine. Now, let say we get a new detergent. So, we need an adapter that makes the detergent work as soap inside washing machine.

Now, lets think about the problem in development prospective. We have a situation where our existing system( our client) accepts an interface to perform some task. And we need to introduce a class/interface do similar work but it does not implement that interface.

And , we can not change the interface or even the class from code. So, we have to make an intermediate class that keeps both interface and the class intact but allow client to use that class. So , this is the adapter.

Generally adapter accepts a class to make it compatible with client. Client -> Adapter(Class)

So, in adapter pattern there will be mainly 4 elements

Note : We have to think logically about what can be compatible to the system. Only a similar functionality provider are the best candidate for adapted. That means the logical candidate, not every object 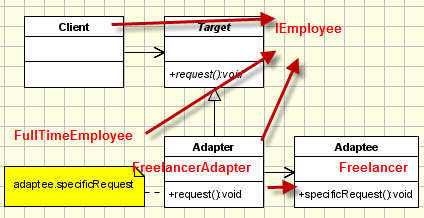 Client used to call its system exist objects by the Interface (target interface) so client will call our adapter by the interface.

That means our adapter class will have implemented target interface and it will have our Adapted Class(or Interface) inside of it’s body as member(composition, has a relation between adapter adapted).

And, adapter will override the interface implemented method using its adapted provided methods. So, that is the general idea, lets see details in the example.

An office has many employee, and they are all full time. And, now company want expand its business to different area and will hire Remote employee who will be working as freelancer.

So, our manager will should get those freelances accessible like as full time employee.

And, we need an adapter to work for that. So, without the adapter and adapted the system contains .

And , for the newly added freelancers , we need to have

So, finally client will use freelance adapter class and freelancer work together feel like as employee.

And, a system exist Class, FullTimeEmployee.

And our client who calls the the adapter along with adapted by IEmployee reference.

I have change some method names as it works little differently from Java.