In this article we are going to learn about Facade Design Pattern.

What is Facade design patter?

Facade provides a simplified interface that performs many actions.

It is very easy and simple design that we may use every day and might not know.

Think of doing many task from different object, and if you keep all the working object in a class and call all the function using that class. This is the main them of facade design pattern.

Suppose, in a baking system, we have to withdraw 50 taka from our account. So, we have to perform

Facade pattern is a simplified version of moderator design pattern where only one active moderator class and the colleagues are passive classes. 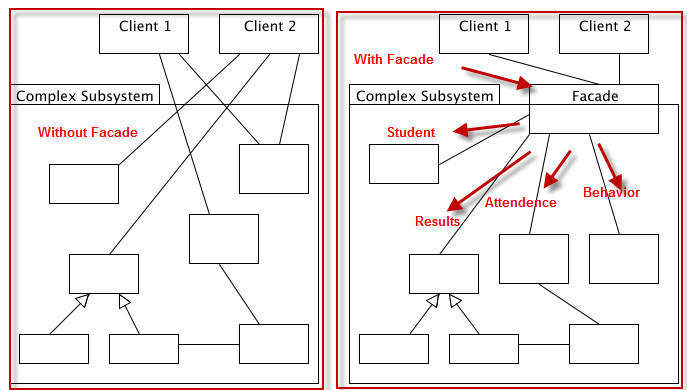 As we know, it is actually do the task with other objects and provide client a easy way to access those classes, so a class will be acting as facade.

And there will be task involving classes

And, there will be a client who actually call the facade to perform the task.

Lets think about a school result publish system. As if we need to publish a student’s results to his parents as result card.

And, usually in the result card there are attendance percentage, behavior marking, subject marking etc are there.

So, let assume this three should be added in the result card along with date of birth and name.

So, here is the Student class contains student name and date of birth.

And result , behavior and attendance class.

Now, we will implement all function together in a facade class. Let’s call it ReportCardFacade

And finally, facade calling client who contain the main program.