In this article we are going to learn Visitor pattern.

I have use mainly Java with Eclipse and c# with VS2010.

What is visitor pattern?

In OO design, some time we need to add some extra function upon existing system(specifically objects) without changing the system.

Visitor pattern allow use to perform additional functionality over grouped or non grouped objects along with keep the functionality abstract from the operand(visitable) group.

In this pattern, there are mainly 2 type.

This is the state Visitor pattern allows for one or more operation to be applied to a set of objects at run time, decoupling the operations from the object structure.

Suppose, we are creating a reporting module for a group of customer. And the report must be detailed.

So, the customers will accepts the visitors and visitor(report generator) will access the information and process along with reporting logic and will be provided along with those visitors.

Another example, suppose a supermarket. Where the customers are visitable, and Cashiers are visitors.

When a customer check out, cashier visits, takes items from us and provide price memo and items in a bag. He also provide memo with tax calculation.

Previously we have seen similar pattern Decorator, but in here it is more generic. And, there is not dependency among each other and it makes added function logic(inside visitor) abstracted from the visitable objects.

We can also implement visitor classes using reflection to make it more dynamic. 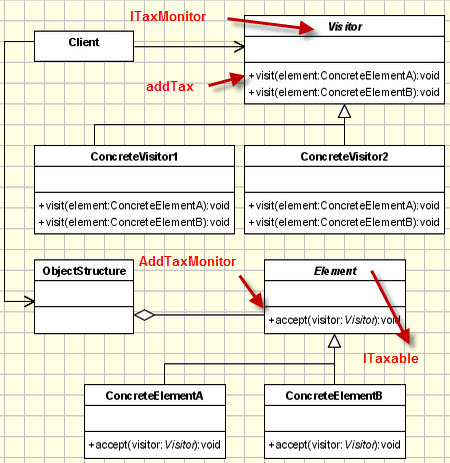 Generally, we see the whole system is based on 2 abstract class/interface(i have used interface). One is visitor and another is visitable.

Visitable defines the classes which will be visited. And, there should be at least one operation(method) in the visitable interface that will allow each implemented class will allow a visitor(the interface).

That means , visitable must have at least a method that allows visitors to see it monitor(visit) it self.

And, the Visitor interface. It will have the one or more functions that will be added one or more type of visitable objects. We have to specify the class to visit here because, each type of class may implement different added functionality. (from my example below, the tax of fruit and the tax of drinks may be different).

The visitor function will be implemented in the class level.

And, as for govt rules, we have 3 kinds of taxes.

Initially we will discuses code for only Sales Tax , you may find other implementations in code.

We have to implement visitor in a way so that any time if we need to add another kind of tax, we need minimal changes. Now, we have

Now, let make it generic way to apply visitor pattern. There will be interface for all products.

And, we will have Client(contain main program) who will buy a product and automatically associated tax will be added.

So, we see, a taxable product accept a monitor (or tax inspector) and it will return own price + price added by the monitor. And , interface for Visitors

We see, it takes there products and return after adding taxes. So, lets implement ITaxable in products.

If we see the addTaxMonitor, it will get a tax monitor(any type) and add the extra value by put it self in side the monitor to get the tax added price amount.Now, lets add client than contains main method and calls visitors as well as visitable classes.

For this example, I have added only price in a product to keep it simple.

We can add custom objects, but we have to be careful that the object which property we will change, we have keep that all over visitors and visitable interfaces.